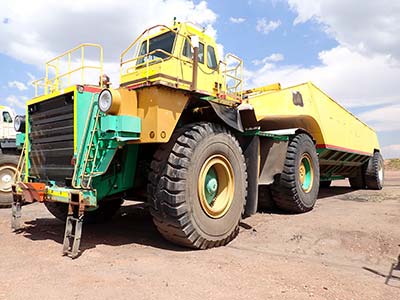 This article was published by Ben Hailes on 24 September, 2020

Sounding more like a dig my wife might have at me, the 'belly dumper' otherwise known as a bottom dumper is a type of off-road haul truck that unloads its material through a dump gate at the bottom of the trailer.

Differing from the standard rigid off-highway rear dump truck, they are located across many mine sites globally, however, are most commonly found in the United States. In Australia, they are used in specific coal, and bauxite applications in Queensland though are increasingly being decommissioned with age.

Available in articulated or rigid configurations, they are most suited to lighter and finer materials that include coal, bauxite and salt. In their articulated ‘config’, these machines have three axels incorporating a tow tractor and dump trailer with two two steer tyres in the front and four tyres at the rear of the truck and a further four tyres at the back of the trailer. Their rigid sibling is a stranger looking beast and as the name suggests, present as one integral unit fitted with two axels front and rear and the belly located in the middle.

The choice for the size and type of dump trucks at any mine depends upon a lot of variables, such as the type of mine, size of mine, minerals being mined, capital and loading machinery available. Belly dumpers are no different and are best suited to large-scale sites with ramp gradients of 5% or less.

Highly manoeuvrable, these trucks offer up to 85 degree steering angles in both artic and rigid formats and are highly mobile in moving around working areas. Fitted with clamshell dump gates in the floor of the dump trailer, operators can control the discharge rates of the hauled material by the degree of the gate opening.

Despite their success, the off-road belly dumper is not for everyone. These trucks often require dump stations with a bin designed to allow the coal to fall from below the truck into a hopper/crusher.

While offering the prospect of high transport speeds over longer hauls they require well-maintained haul roads, that are of course not universally available at mine sites around the world. While not household brands, the manufacturers of these machines are held in high regard and include Kress, Mega and Rimpull in the United States as well as our very own Kador Engineering in Australia that still build these weird and wonderful machines with capacities in excess of 240 tonnes.

If you’ve not seen one in action, take a look at the video below:

This article was originally published by the Components Only team in the September 2020 issue of "@ The Coal Face" magazine.